Home Forex When will the Fed cut interest rates?

What’s happening with the Fed?

On June 19th, 2019 as expected by most market participants, the Federal Reserve has decided to leave rates unchanged. However, as we have noted in our previous article, the Fed has changed their language, adding a much more dovish tone. That said, only one Fed official – Bullard was ready for a rate increase on the decision day. Come one week later, two other Fed officials have publicly made the case for a more accommodative policy. That, coupled with pressure from the White House to slash rates and raise asset prices, has convinced markets the Fed might be changing their previous guidance of no rate cuts this year.

The CME FedWatch Tool was created to give valuable insights into what the market expects the rates to be in the future. The 30-day Fed funds futures contract is used to calculate probabilities of future interest rate changes. Below are some interesting pieces of information from the FedWatch Tool. 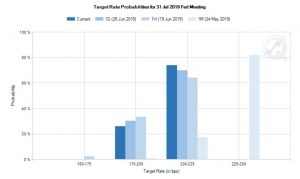 In Figure 1 we can see just how much the recent Fed meeting has changed the expectations of a rate cut. Just a month ago, prior to the meeting, the market was pricing in a firm 80% chance of no rate change in the July meeting. However, today the implied expectation is that the Fed will most likely cut rates by 0.25% (75% probability). Not only that the market also does not revoke the possibility of a 0.5% rate cut by the Fed (25% probability). 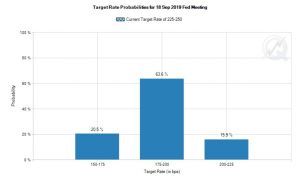 In Figure 2 we can see that the markets even expect a second rate cut by the Fed in the September meeting (63.6% probability). 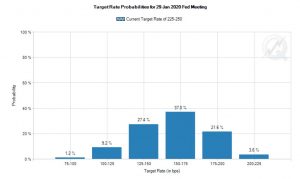 In Figure 3 we can see the implied probabilities of different Fed rates in the 2020 January meeting. It basically helps us gauge where the market expects rates to be at the start of next year. According to the implied probabilities, the market expects rates to be either cut 2, 3 or 4 times, by 0.25%. The average expected cuts stand at 3.2 times the minimum of 0.25% rate change. 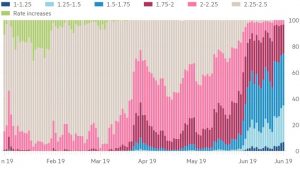 Finishing off the graphical insights is an interesting study published by the FT. Figure 4 shows us the probabilities of different Fed rates at the end of 2019, over time. As we can clearly see, with time the market has significantly shifted its expectations towards more rate cuts this year. That comes from some (at the start of the year) even believing that there would be rate hikes this very year.

So, what does all this mean for investors? All this might be useful information, however, it there is always the question “have the markets already priced this information in”? That said, from what the price of EURUSD tells us, the 1.7% increase in EURUSD in the past week might just have some more pricing in to do.

The EURUSD price is currently testing the nearest resistance at around 1.14. The nearest support is at 1.133. 14-day RSI is within a normal range, at 63. The previous long-lasting channel has been broken, and a new one has formed (a rather steep one too).