Nowadays GDP growth is still the benchmark for the state of the economy. It is the driver of income, employment, investment and consumption growth.

As mentioned, the US is now in the longest ever recorded expansion in US economic history. It is now spanning over twice the average length of post World War 2 era expansions. 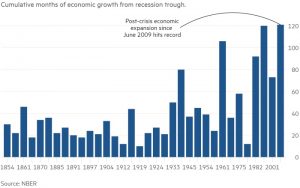 Moreover, this can be further emphasized by the following statistics:

Below are the average real GDP growth rates for each of the 4 most recent expansion periods:

It is quite clear that GDP growth is slowing down. While there are many theories as to what causes that, in general, there are a few that I find very plausible. First of all, the financial crisis of 2007-2008 was marked with extremely high levels of debt. Although the Fed drastically cut rates to spur consumption and investment, companies, and households alike simply had too much debt and had to prioritize paying those off. It’s called deleveraging. Secondly, the pace of innovation has slowed down. As computers and digitalization had enormous benefits for the economy, can you name an invention (other than your smartphone!) that was completely revolutionary within the last 10 years?

Third, unemployment is near all-time lows. This is supposed to mean higher GDP growth, right? 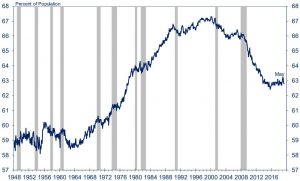 Not even that, the actual labor force itself and the working age population are both growing at extremely low levels, compared historically. This is due to the fact that the so-called “baby boomers” (70+ million of them, representing more than a fifth of the current US population) are now entering retirement age. 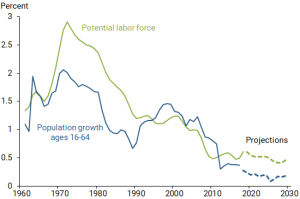 What does that mean? Basically, even though unemployment is low, the working population is not growing fast enough and isn’t interested in working as much to spur faster growth.

And what does this mean for investors? For equity investors specifically, it simply means that given the current high valuations, there is a slower expected growth rate in both GDP and stocks.

The S&P500 is currently trading close to the only resistance level of around 2955. The nearest support is around 2900. RSI is in the normal range, at around 64.