Home Learn to trade US demographics and the stock market 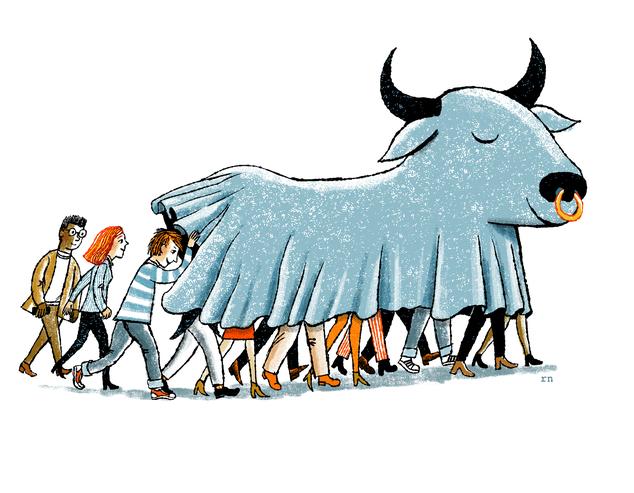 In one of my previous articles, I have outlined some of the reasons why US GDP growth has been slowing down as of recent. Some of them were high levels of debt, declining labor participation rates, and decreasing productivity and growth in the labor force. Valuations are at the higher end of the spectrum (and higher valuations today generally mean lower future returns). Thus, it’s easy to argue that lower productivity and high current valuations are likely to actually lead to lower stock market returns.

However, in this article, I am going to reveal some interesting data and arguments pointing to the contrary. I will be delving a little deeper into some demographical aspects in the US, and how these forces might help shape future returns. I hope this article will serve as a helping hand to think about related issues in a new way and I also hope it will be thought-provoking.

The change of generations

It is natural that generations change as people age. Kids become grown-ups, parents, and have kids of their own. This is reflected in the change of generations, as often referred to by the media and economists. The most recent generations in the US, accounting for a large share of population have been the Baby Boomers (depicted in gray in the chart below), Generation X (the yellow bar), and Millennials (the red bar). The chart shows the annual births in the United States. As we can see, the Baby Boomers and Millenials were born within a period of heightened birth rates in the US. Whereas Generation X was born mostly within lower birth rates. This is important to note because this resulted in different numbers of populations adding to the labor force at different times. 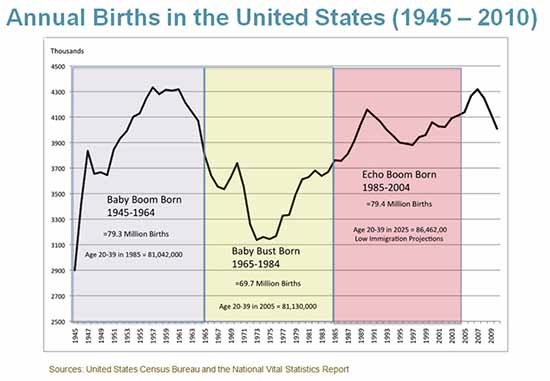 Consumption is a key driver of GDP in the US. In 2018 it accounted for around 70% of total US GDP. Let’s take a look at how much different age groups consume in the US. 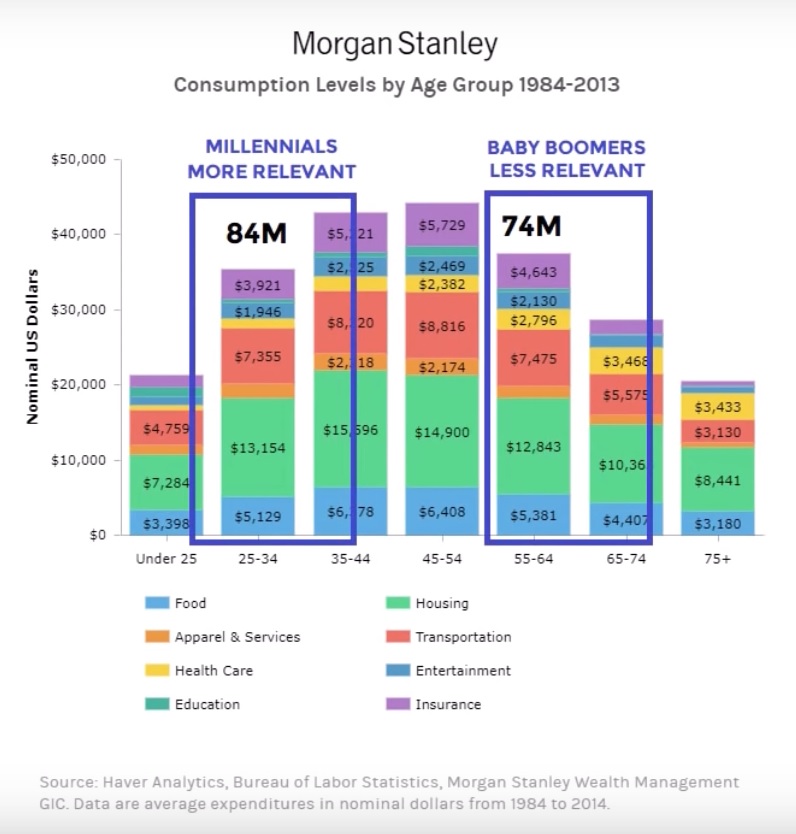 What this chart shows is Consumption levels by age group and source of spending. The source of spending is not as important as the total spending by a certain age group. As we can see, consumption is maximized between the ages of 35-54. Also, the blue rectangles represent the current age brackets of the Millennials and the Baby Boomers generations. The chart points to the increasing significance of the Millennials generation versus the Baby Boomer generation. Also, if we go forward in time, and calculate when the Millennials will be in the sweet spot of maximum consumption, we arrive at the year 2035. That’s when the consumption of the Millennials will be maxed out, and start to decline from that point forward. That means increased economic activity from now on, to the year 2035.

The timing of the increasing importance of Millennials versus Baby Boomers is important for the following reason. The stock market performed extremely well when the Baby Boomers were of similar age to current Millennials back in 1984-1987. Just as it did as of recent. Let’s see this on a chart to make sense of it. 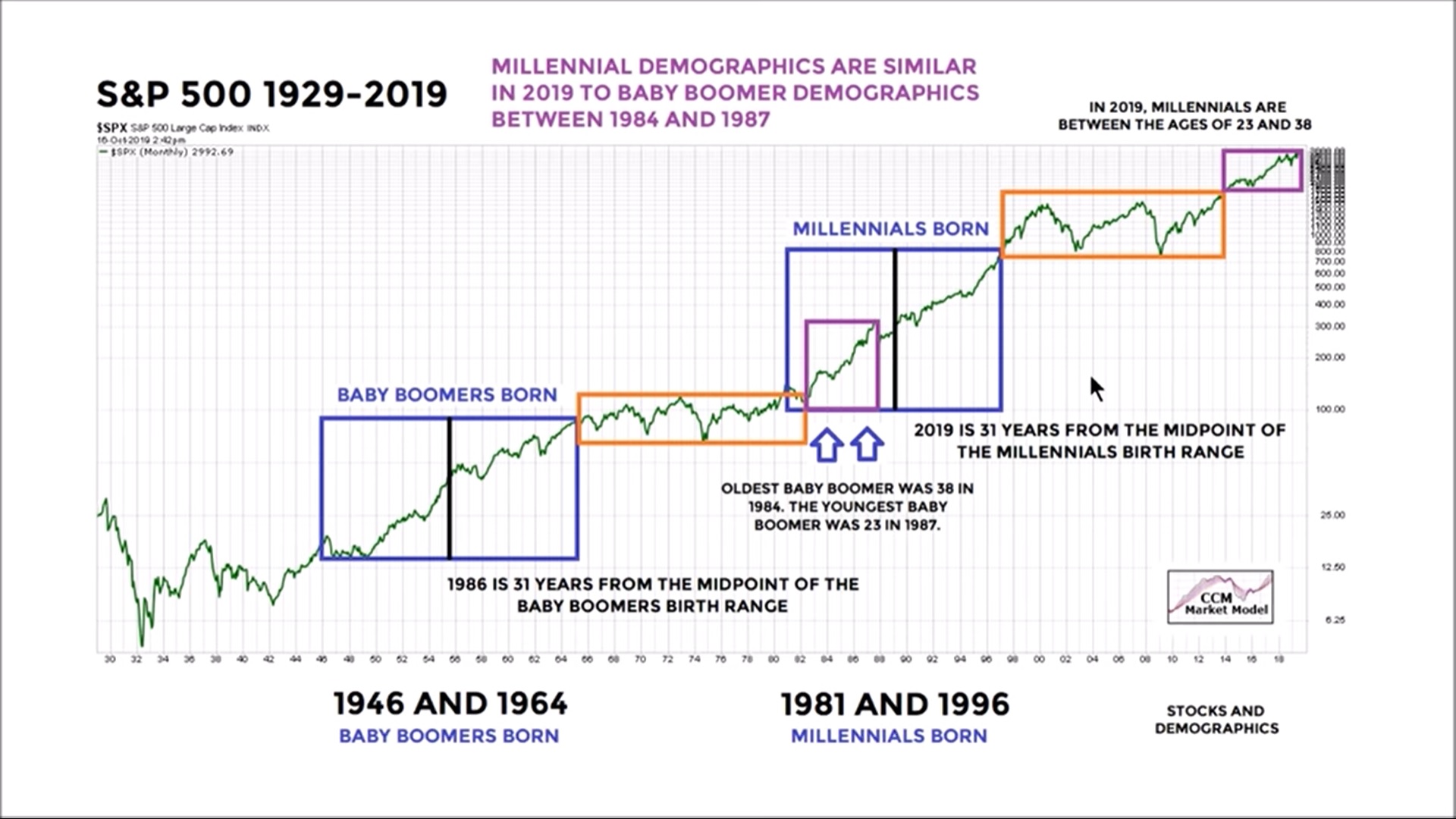 The chart above shows the performance of the S&P 500 index between 1929-2019, on a log scale. The birth ranges of Millennials and Baby Boomers are depicted in blue rectangles. Note that the Millennial demographics are similar in 2019 to Baby Boomer demographics between 1984-1987. These two periods are depicted on the chart by purple rectangles. The purple rectangles also represent a time when both Millennials and Baby Boomers (in their respective times) started increasing in importance versus other generations and started entering the sweet spot of consumption we have talked about in the previous chapter. What followed after the first purple rectangle period was a significant rise in the stock market.

The orange rectangles represent times when the stock market did not perform well, and basically went nowhere. If we assume that history repeats itself, and that demographics is a driving force in the economy and the stock market, this suggests that the next several years should be highly productive for the stock market. Just as it happened when the Baby Boomers were entering the sweet spot of consumption. How productive? Between the years 1987 and 2000 (corresponding to 2019 and 2032) the stock market has gone up by more than 5 times. That is a 14% compounded annual growth rate.

More evidence from the MY ratio

Our previous argument that demographics is an important driving factor in the economy and the stock market can be further underlined by the following ratio. That is the so-called MY Ratio, which reflects the ratio of the number of people aged 35-49 (“middle-aged”) to those aged 20-34 (“young”). The greater the relative number of middle-aged people, the higher the ratio. Let’s see how well it correlated to the stock market returns within the last few decades.

This ratio works because it reflects the relative size of the working-age population. Similar to the consumption sweet spot idea, the MY ratio depicts the idea that the medium-aged population both consumes and invests more than the younger population. They are more efficient and is a better source of productivity than the younger counterpart.

US population stock ownership by age

Another important data point contributing to the significance of the MY ratio is US stock ownership demographics. Gallup has compiled some interesting data on the ownership of stocks by age.

This means that first, the MY ratio has increased in importance over time (younger people invest much less in the stock market than they used to, versus medium-older people, thus, the ratio has more weight and more significance as an indicator). Second, since stock ownership has declined over time, there is more room to grow, and more potential for the general population to get involved. That means more upside for the stock market.

What about the older demographics?

If we delve deeper into the numbers and see how much the older population invests in the stock market, we can see an interesting tendency. 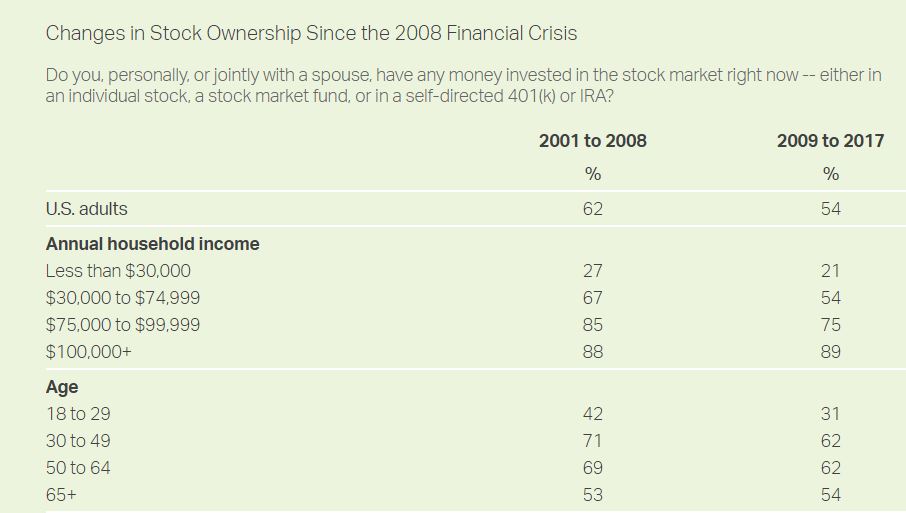 On a side note, the statistics also show that the more you own, the more you are likely to invest in the stock market. This fits perfectly to explain why there is a sweet spot for consumption and investment, as we have discussed earlier. As you grow from young to older, your productiveness increases, and so does your income. As you reach a certain age, it starts to decline, together with your income, and consumption. However, what does remain is the interest in the stock market.

This has implications for the consumption graph we have talked earlier about. If the Millennials are about to enter the so-called sweet spot, many of the young people will turn into middle-aged ones. That means they will significantly increase their stock ownership. While the Baby Boomers will remain fairly invested in the stock market still. That is a bullish sign for the stock market in the long run.

What about higher valuations?

We have also touched upon the fact that higher valuations (as often measured by the CAPE Shiller PE ratio), tend to lead to lower future returns. However, this is not always the case. In fact, if you take a look back to the year 1994, the Shiller PE ratio was about 20. The median Shiller PE ratio up until then was around 15. So, looking forward from the year 1994, you probably thought stock valuations were rather high. However, what happened was, the stock market reached newly unimaginable heights. It rose by more than threefold within 6 years. Those 6 years were also the sweet spot of consumption for the Baby Boomers, as we have discusses earlier. I have depicted this in the following chart.

What we have discussed in this article is some interesting data pointing to how important demographics are to the economy and the stock market. This is especially so for the timing of large generations that were born within a small window when birth rates were high. As the Baby Boomers generation decreases in importance, and Millennials take over, there is historical evidence to support the claim that this is likely to lead to high stock market returns. As we age, we consume and invest more. However, as Baby Boomers are entering the elderly stage of their lives, they will remain invested in the stock market, as Gallup data shows. There is also more upside to the stock market due to generally lower interest in the stock market by the public currently, versus historically. Additionally, already existing higher valuations do not necessarily lead to lower future returns.

So, if you believe demographics are stock market destiny, and that history repeats itself, you might want to be invested in the stock market for the long run. Given that bond yields are rather low globally, there are many dividend stocks paying a higher yield than bonds do. This makes up for a good additional proposition to divert your investments into equities, instead of bonds.