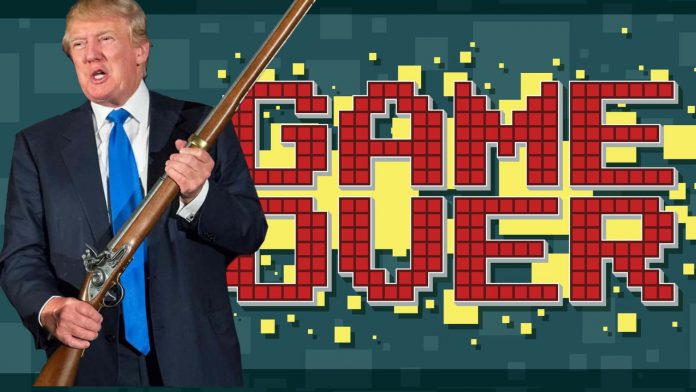 As we have covered in our previous article, the Fed has recently (July 31st) cut the interest rates by 0.25 percentage points (however, not as dovish as President Trump would have liked). The very next day (August 1st) President Trump tweeted he would impose a 10% tariff on the remaining $300bn worth of Chinese exports.

This came after he reportedly dismissed the advice his advisors gave him to not move fast with additional tariffs.

The US-China trade war is one of the more influential events affecting the markets on a regular basis. President Trump is an active participant on Twitter and very often you will see markets react to his tweets. Especially when it comes to the trade war between the US and China.

President Trump has long been well-known for his obsession with the stock market. You will hear him brag about it or take credit for the stock market rallies quite often. Given this, he often tries to verbally influence the Fed into a more accommodative monetary policy stance. However, what happened on August 1st was really extraordinary. Not only he prior went on to criticize the Fed for its recent not-dovish-enough move, but he actually went against his own advisors to introduce new tariffs. Why is this significant? If we recall the latest Fed statement, they cited the US-China trade war as a major concern for the Fed. So, if you’re President Trump, if the Fed is influenced by the ongoing trade war developments and you do want to influence the Fed, why not influence trade wars themselves?

This may sound at least counterintuitive if not absolutely crazy and out of line for some. And we will get back to this in a minute. Until then, let’s try to understand President Trump’s position.

A bit of politics

New elections in the US start on November 2020. And President Trump has already started his 2020 presidential campaign (long ago actually). It is clear that his goal is to get reelected, and he has chosen the stock market as a big selling point to the general public.

Why has he chosen the stock market as a barometer for his success? It’s up to debate and you are likely to find various theories on the internet. However, quite possibly because it’s easier and quicker to influence than the whole economy as a whole, and especially than the incomes of the middle class. It’s known that the majority of Americans own stock in some form. So, strategically speaking, if you are targeting the stock market, you are sure to gain the support of the wealthy (including donations to the Presidential campaign). Not only that, if you can influence the perception of the middle class that indeed Trump’s success is associated with the stock market, then you are highly likely to win the next election. Not saying that it is correct or just, or good, but at least that might be Trump’s reasoning.

Going back to the trade wars and the Fed

Once we have the political situation in mind, we can start to understand that the recent trade war development might actually be President Trump trying to force the Fed to cut rates even further. As interest rates go down, stock markets tend to perform well, adding to Trump’s “resume”.

If you’re an investor, you’re probably thinking “isn’t this crazy”? To go for destructive strategies for the economy, while trying to push the stock market higher? Let’s look at an interesting graph compiled by Bloomberg economists:

Bloomberg economists have looked at and predicted 3 outcomes to the China-US trade war impact on GDP growth. That is, for China, the US and globally. We will look at the middle case scenario, which is an escalation to 25% tariffs on all Bilateral trade. There are a few things to notice. First, the impact of the trade war on China is far more than the impact on the US. Secondly, we are still yet to feel the ramifications of the trade war on the economy, as it increases over time, lagging quite a bit. Third, the effect of the China-US trade war will not be in full effect yet on November 2020, the date of the new election.

What does that mean if you’re President Trump?

Since it takes quite some time for the full effects of the trade war to take place, you can basically use this to your advantage. That is, you escalate the trade war, the market reacts and declines slightly. The Fed, reacting to the trade war escalation, cuts rates, possibly even giving markets assurance it would keep cutting in case trade wars escalate even more. After the Fed has taken a more accommodative stance and as of November 2020 approaches, you strike a deal with the Chinese (the trade war is hurting the Chinese more than the US, giving the US a diplomatic edge). The stock market soars, and you are still in a low-interest-rate environment.

You might be thinking, its a rather crazy and risky strategy, risking economic growth and possibly a recession for a likely short-lived upside, used for political gain. And you are absolutely right. If this does play out in such a way, then the Fed is basically left with little room for action as rates are low, and the economy is slowing down due to the trade war beginning to take full effect.

It’s a rather theoretical example that we have gone through, and traders might be asking the effectiveness of President Trump’s tweets regarding trade war escalation. For this, let’s take a look at the FedWatch Tool by CME: 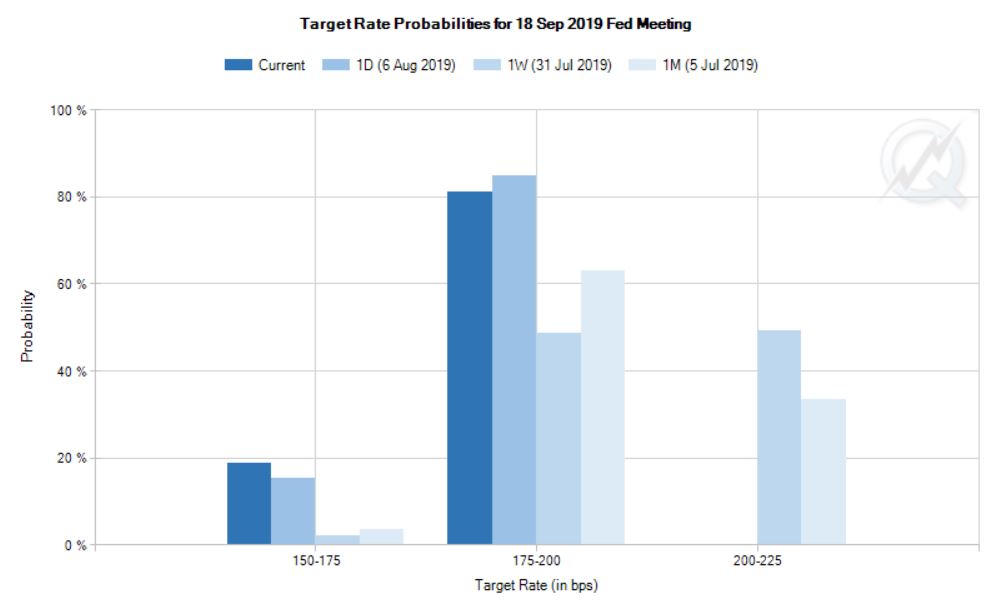 In this chart, we can see the Fed target rate probabilities for September 2019. We will be comparing Current probabilities bar (after the tweets) with the 1W (31 Jul 2019) bar. As we can see, before the tweets the market was implying an even probability between 175-200 and 200-225 bps. That is 50% that the Fed will cut in September and 50% that it will hold rates steady. Today, however, the market has fully priced in a rate cut in September, with a 20% probability that it will cut by as much as 50bps.

Not to say that that is a good approach, because I don’t think it is, however, this just shows the market perceived effectiveness of Trump’s rhetoric in influencing the Fed and the markets. In a way, if the previously outlined Trump plan or the “Trump games” as we called it is true, then this so far just shows the “brilliance” of Trump, getting what he wants.

Don’t have much time to follow all the news, recent headlines and how they affect the markets, but want to be trading? Tradimo’s Signal Community is the way to go. We provide you with real-time trading ideas and trade management. You can use them for educational purposes or if they are in line with your own strategy and risk tolerance, you can mimic them in your live account. Our Forex portfolio opened in March 2019 has averaged more than 500 pips of gains monthly!