Home Learn to trade The relationship between equities and bonds 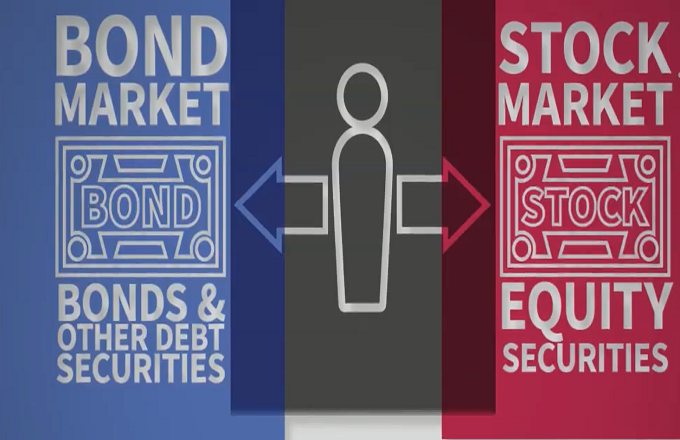 While this in itself is not anything new, throughout the year 2019 there has been a big change in the relationship between bonds and equities. As we’ve discussed in one of our previous articles, the correlation between bonds and equities has been turning positive after two decades of negative correlation, which was beginning to seem like the norm.

The relationship between bonds and equities is key for many reasons. An important one is simply the current chase for yield. When bond prices rise, that means bonds yields going down. As bond yields go down, equities become more appealing, as many solid companies are paying out regular dividends, which are often more than the yield on, say the 10 year Treasury Bond. Investors flock to equities, and equity prices rise in tandem with bond prices. Or, in other words, equity prices have an inverse relationship with bond yields. Since the lower the yield on a bond, the higher the attractiveness of equities.

However, as we will see, when there is a shock to the equity market – think bad news, data, a negative event, then equity prices fall, and bond prices rise, as investors flee for safety. Also, gold prices rise, safe currencies such as the Swiss Franc also rise in value.

First, let’s take a look at the relationship between bonds and equities as of recent, in 2019. For a gauge of bond performance, I took the yield on the 10 year US Treasury bond. Why 10 year? Because it’s the most popular gauge of investors’ appetite for bonds. With the search for yield in place currently, and short term rates extremely at low levels, investors turn to longer-term bonds for a better yield. As far as equities go, I took the usual the S&P 500 index. To compare apples to apples, I also indexed the S&P 500 and the US 10 Year Treasury yield at 100 in 2019. Let’s take a look at how bonds performed versus equities in that period, up until this day.

As we can see, there was a clear inverse relationship between equities and bond yields in 2019 so far. Since bond yields, by nature, have an inverse relationship with bond prices, that means, that bond prices have moved in tandem with equity market valuations throughout 2019. This might be a little confusing, but it is a good illustration of how bond prices have moved in parallel to equity prices. Just how good? From FRED’s data, the correlation between the aforementioned indexes, based at 2019-01-01 was around -0.68.

Why is there such a relationship now? As mentioned before, it’s mostly due to the search for yield. Investors want to place their money in safe and high yielding assets. Equities are riskier than bonds in nature. However, as yields go to extremely low levels, they become unattractive. Equities and especially those paying decent dividends become more attractive.

Another explanation is simply central banks actions. It’s no secret the Fed is currently pursuing its “own” version of Quantitative Easing. Although they are focusing more on the shorter end of the curve to address the recent squeeze in the repo market, it still affects bond prices all along the curve, albeit to a lesser extent on the longer end of the yield curve. That raises bond prices, suppresses yields, and promotes equity investments.

However, the longer picture relationship between equities and bonds is not as clear. If we take a look at the same comparison, since base year 2010-01-01, up until the end of 2018 (prior to that significant correlation in 2019) we will see the correlation is not as significant in that time period.

As we can see, there are periods when equities and bond yields have had both positive and negative correlations. The correlation based on FRED’s data between 2010 and the end of 2018 was barely -0.069. That shows that indeed, there were just as many periods of positive correlation, as there were periods of negative correlation. What could explain that? Well, for one, as mentioned in the “In general” section, when there are some negative shocks, news, that affect equities, equity prices fall, and bond prices rise. That’s an inverse relationship between equity and bond prices, and a positive correlation between equity prices and bond yields. That is, bond yields actually go down as equities fall. Why? Because investors search for safety and it becomes a risk-off trade. And, what is more, this has been the “natural” relationship between bonds and equities throughout the last 20 years.

However, central bank actions have pushed bond yields so low, that this intervention has disrupted the natural rhythm of the markets. Too much cheap money floating around, with no good destination to earn a profit.

So, what makes 2019 different from the 2010-2018 period? Mostly, the fact that the has increasingly been more money floating around, chasing yields, coupled with central bank actions, especially Quantitative Easing, which pushed yields down even further. As mentioned before, the market has become so distorted that now investors participate in bond rallies and invest in equities for yield.

It is important to be aware of such a dynamic for traders as well. Quite possibly, due to the changed market dynamic and continued central bank actions, it may be worth considering participating in bond rallies as well as equity rallies. If, as many say, equities are overvalued, and there were to be a shock in the economy or in the stock market, this would send yields to the bottom, and also inflate bond prices to record highs. Quite a nice profit for you. Generally, central bank activity and economic uncertainty do explain a lot of the price rallies in bonds in recent times.

If you want to learn more about similar topics, check out our courses on Basic Stock Trading, and Advanced Stock Trading. They’re FREE! So, what are you waiting for, enroll now!