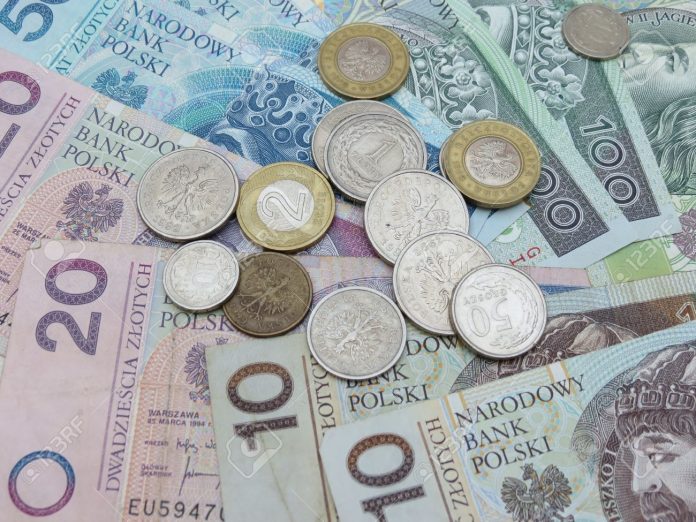 For decades, Switzerland had one of the lowest interest rates in the world. Since interest rates in Poland and many other Central/Eastern European countries were much higher, this encouraged borrowers to take out Swiss franc-denominated mortgage loans that were nearly half the interest rate, compared to that of the local currency loans. For instance, in 2008, the mortgages taken out in Zloty had an average annual interest rate of 8.7%. Whereas similar Swiss franc-denominated loans issued by local banks had an average interest rate of 4.4%. As a result, such loans have skyrocketed and peaked at 198 billion Zloty in 2011. They currently stand at 127 billion Zloty ($32 billion) in total.

Moreover, there have been a large number of lawsuits against the banks claiming that the loans were mis-sold. That is, not enough information was provided on the exchange risk of the mortgage and people were misled. On the 3rd of October, 2019, the European Court of Justice is due to make a decision on the status of 130bn zloty (30bn Euros) in outstanding Swiss franc-denominated mortgage loans, which borrowers claim to have been mis-sold.

Foreign currency loans are a tricky problem that banks and regulators face. If households are struggling to make the payments on their mortgage loans, this could lead to weaker consumer spending. That, in turn, affects the pace of recovery of the whole economy. If higher proportions of those loans turn bad, that in turn hurts the profits of the banks. This decreases lending and again ends up hurting the economy. And yet, converting the loans into local currency at a better exchange rate for consumers could force banks to incur additional losses.

What the suing parties want is for banks to accept and swap the loans into a better exchange rate. That is an exchange rate of Swiss Franc to Zloty that is well below the current rate of 4. In comparison, In 2008, when many of the loans were taken out, Swiss Franc traded at a ratio of 2 against the Zloty. In an extreme case scenario, a forced revaluation of these loans could cost Polish banks 60-80bn Zloty, according to calculations by ING. This could weaken the Zloty significantly, although the exact timing of the move could prove hard to predict. This is because legally, these cases could take years to fully resolve.

This trouble also comes at the same time as the slowdown in manufacturing in Germany. This also affects the economic climate in other Eastern European countries. As the global and EU economic climate worsens, this forces investors to look for safer assets. In turn, investors sell the currencies of the smaller, open economies in Europe, which tend to be sensitive to the risk appetite of investors.

An interesting comparison could be made to the case of Hungary, which ruled out in favor of the borrowers and forced banks to crystalize sizeable losses in a similar case to Poland’s, in 2011. Just as the Zloty, the Hungarian forint has also depreciated in value significantly against the Swiss franc since 2008. 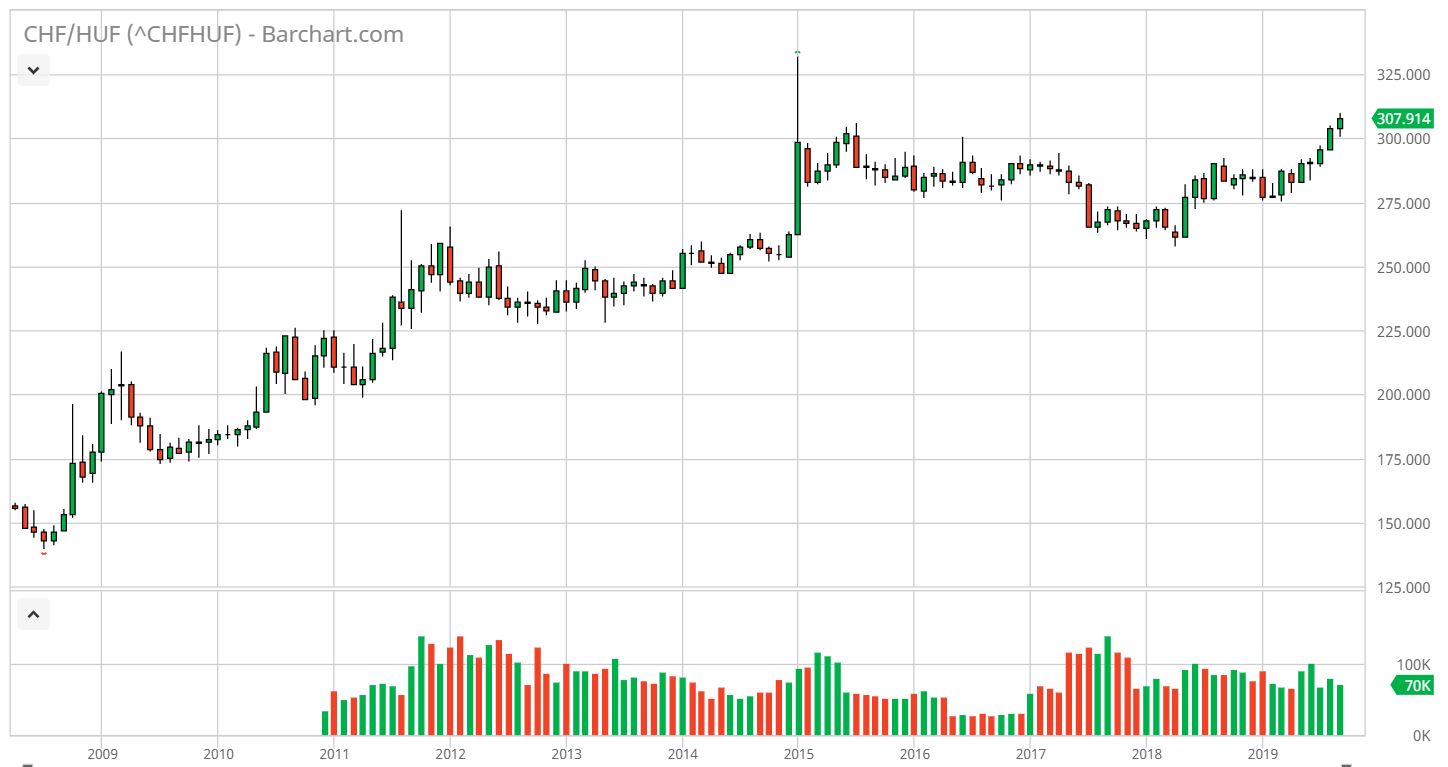 For traders, this could also be a good opportunity to take advantage of the potential revaluation of the mortgages. A hit to the banking system would be weakening for the local currency. Moreover, as the slowdown in Germany, the EU and globally continues, this raises the risks of a recession. Investors tend to flock into the Swiss franc during times of distress and heightened risk/volatility in the markets. This could be depicted in the pricings of Zloty and Swiss franc just after the recession began. 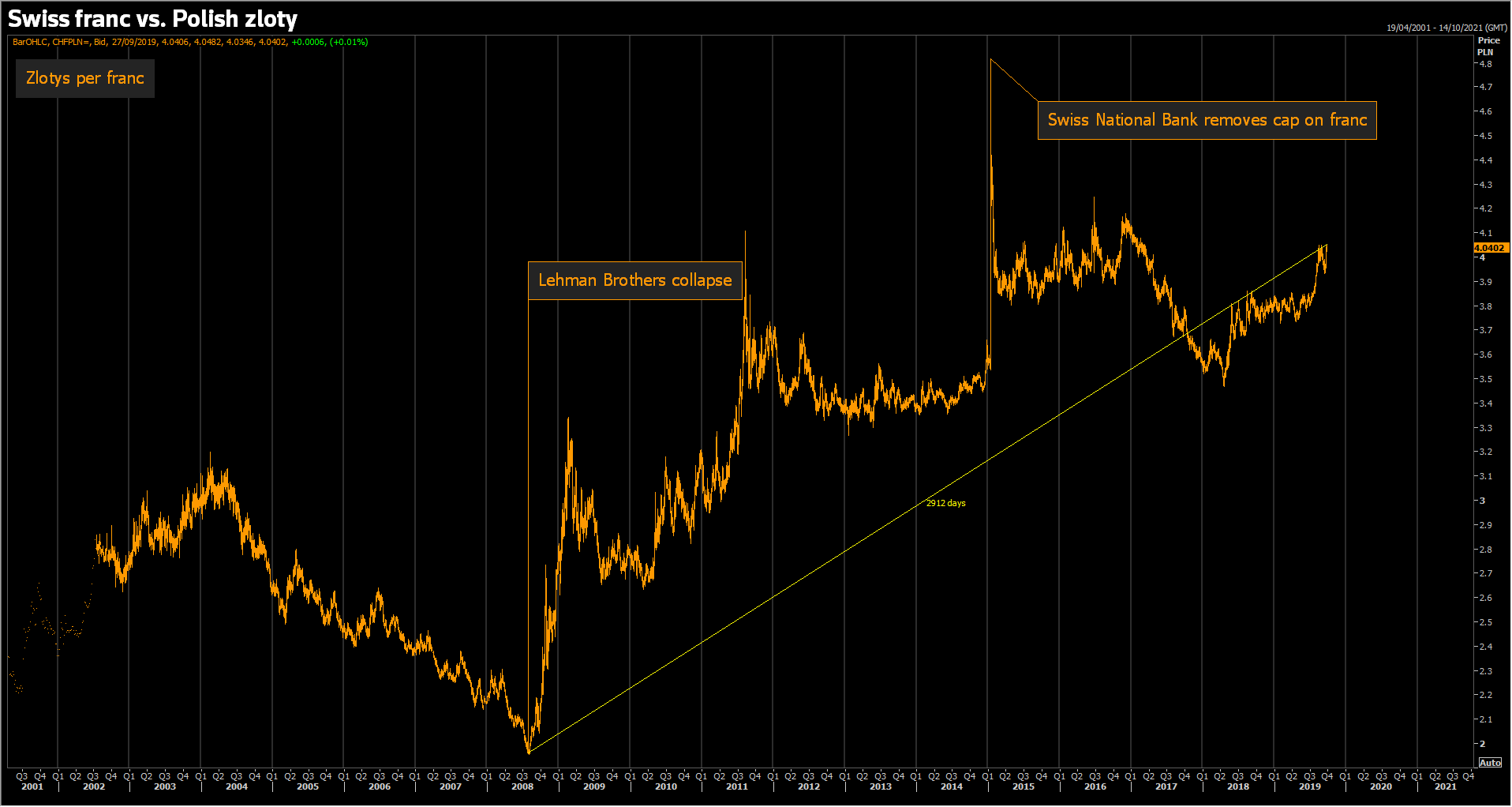 Furthermore, in the case of Hungary, the central bank actually accepted the depreciation of the currency with arms wide open. The central bank cited improved exports as a big positive sign, as the forint depreciated against the Euro too. This was also due to the fact that the foreign currency debt has been reduced significantly. So, the central bank had less of an incentive to raise the exchange rate in order to relieve the foreign debt burden which used to be as high as 90% of the national GDP several years ago. Similarly, Poland’s share of foreign-currency-denominated debt declined to 28.6% in 2018, from 33.7% in 2014 (source: Moodys) and its debt to GDP is also at a rather low level of around 50%.