On July 24th, 2019 the new Prime Minister of the U.K. took office and within 24 hours of assuming the premiership he replaced more than half of Theresa May’s cabinet with hardline Brexiteers that will push for a hard Brexit (no-deal).

Brexit has already KO’d 2 Prime Ministers and the last one really went down throwing swings and fighting for a deal that she and the EU considered fair and less aggressive for both economies. In my opinion, it was a mistake and a complete circus what the UK Parliament put everybody through.

Some say that a no-deal Brexit would put the UK in a full recession and others say it’s the only way but what I’m really interested in is how the market is pricing all of this drama. A no-deal Brexit would have insanely bad implication for all governments involved. Remember the Irish border backstop? Well, that’s just the tip of the iceberg.

The Irish border backstop secured, no matter what the outcome was (if the UK were to leave without a deal that is), there would not be any new physical checks or infrastructure and the border would remain consistent with the current status and avoid a hard border. This might not be the case anymore according to the new Prime Minister who said the EU should drop the Irish backstop from new negotiations.

The markets are pricing this negatively off course and the Pound just hit the lowest levels versus the US Dollar since March 2017! The deadline for the UK to leave the EU is October and to make matters worse the House of Commons will be on summer recess until September 3rd.

We only see more downside and we will be looking for opportunities to short the Pound. 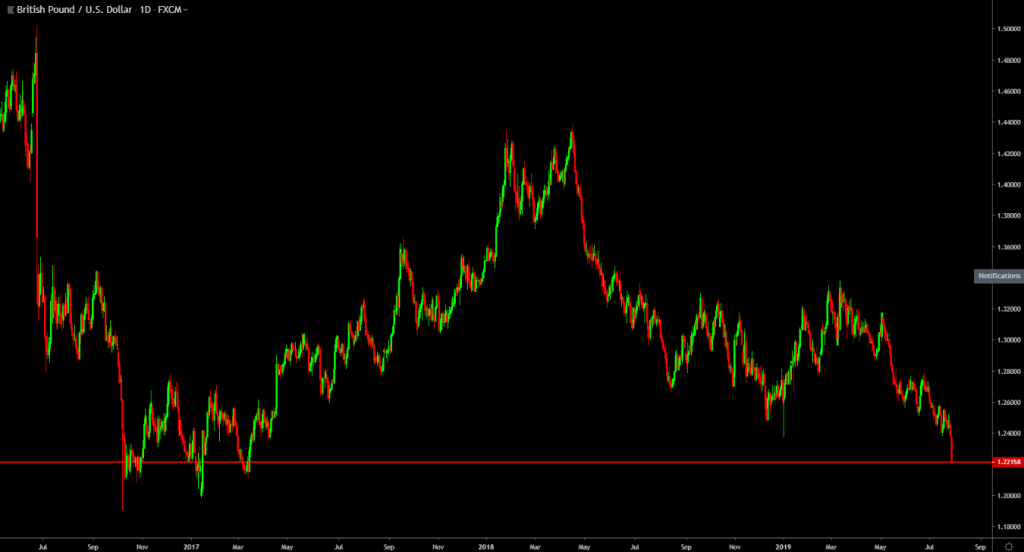