Home Learn to trade Is a recession coming soon? What the data suggests 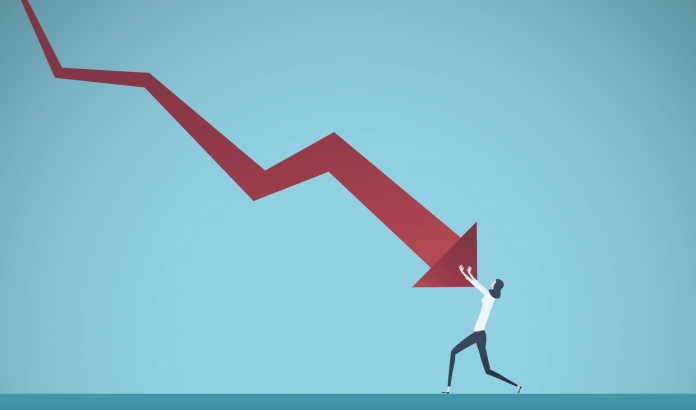 Timing recessions or timing the market around recessions is notoriously difficult. While there are a few exceptions and statistical outliers, timing when a recession will hit precisely is almost impossible. Even economists and financial analysts who dedicate their lives to predicting the economy and the markets usually do not see it coming.

There are many problems facing the US and the global economy. Namely, the slowing growth in China, stalled growth in the Eurozone and industrial production hit in Germany, negative rates in the Eurozone and little to no room for further monetary stimulus, possible Japanese style stagnation in the EU, slower than normal growth in the US, US-China trade war, Brexit, small room for monetary stimulus in the US and many more.

There has been a lot of talk about the inverted yield curve recently. Investors point to that as an important leading indicator that has great recession predictability. You can read more about the yield curve and the possible reasons as to why it has recently inverted in one of our previous articles.

Additionally, there is a general bearish, cautious sentiment in the market. Many are very cautious to invest in the stock market due to the large CAPE ratio (high valuations today usually imply lower future returns). Also, the world’s largest hedge fund, Bridgewater Associates, has recently made a big bet that markets would fall by March of 2020.

All of these factors play a role and lead to a very tense, sensitive environment in the markets and the economy. However, does everything really point to a recession? In this article, we will be taking a look at the most recent economic data to search for answers. Is the risk of a recession really as high currently to support such pessimism? Let’s take a look.

However, the labor participation rate has stopped decreasing and instead has started increasing as of late. This points to a stronger labor picture, which is not recessionary as of yet, according to this data.

Initial jobless claims is a report that measures the number of jobless claims filed by individuals seeking to receive jobless benefits. The report, published since 1967, also shows how many unemployed individuals qualify for and are receiving benefits under unemployment insurance. This figure is closely monitored by investors, traders, and economists alike. As we can see from the graph below, it usually has the opposite dynamic prior to crises to the labor participation rate. That is, Initial claims rise before a recession hits, and we have recently not seen that happening.

The Coincident Economic Activity Index includes four indicators: nonfarm payroll employment, the unemployment rate, average hours worked in manufacturing and wages and salaries. The trend for each state’s index is set to match the trend for gross state product. As it turns out, this index generally has an inverse relationship with the initial jobless claims numbers prior to recessions. Initial claims rise, whereas the coincident economic activity index drops. Or, in other words, they converge and often pass one another, just as it happened in 1990, 2000, and 2008.

However, as we can see in the graph above, the coincident economic activity index and initial jobless claims remained rather steady and parallel to each other. This is not indicative of a recession.

U3 Unemployment Rate and the Length of the Business Cycle

Since 1975, the unemployment rate (U3) has crossed under the natural rate of unemployment at approximately the 2/3 mark of the expansionary cycle. During the current expansion, the rates crossed in Q1 of 2017 or 8 years into the cycle. That means this cycle should be about 12 years in length, and the next recession should develop sometime in 2021.

That gives some breathing room to the current expansion. And it is also a counterargument to those saying that this current economic expansion is too long and that we should see a recession come in the next few months.

Learn the basics of Forex Fundamental Analysis in this FREE 1.5-hour course 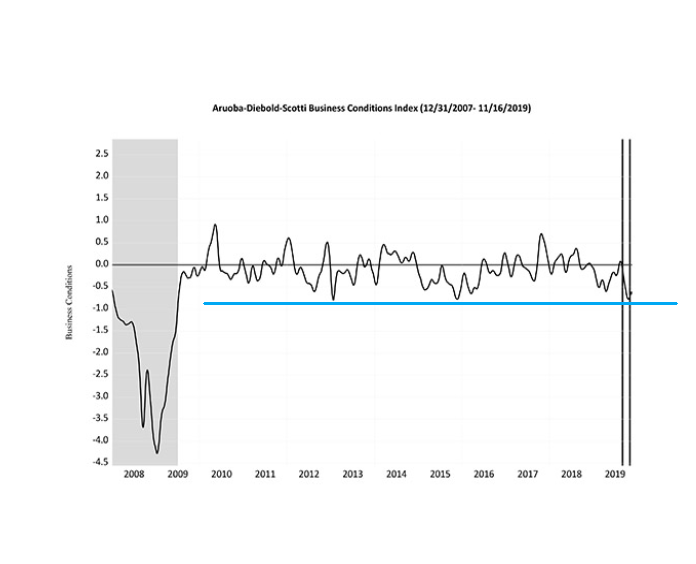 The index is rather volatile in nature and has dropped below average as of late. However, it is still within the normal volatility range of the last 10 years. It also has started rising as of recent. Hence, this should not thus far cause alarm. However, it should be monitored for further negative developments.

The Industrial Production Index (INDPRO) is an economic indicator that measures real output for all facilities located in the United States manufacturing, mining, and electric and gas utilities. The year 2012 has been set as the base year (at 100). The index is not always a great leading indicator, however, it is worth keeping an eye for. Recently the Industrial Production Index has followed a sideways path, with some downside as of recent.

The Manufacturing Business Outlook Survey (or Philadelphia Fed Manufacturing Index) is a monthly survey of manufacturers in the Third Federal Reserve District. Participants indicate the direction of change in overall business activity and in the various measures of activity at their plants: employment, working hours, new and unfilled orders, shipments, inventories, delivery times, prices paid, and prices received. It is a good way for investors, traders, and economists to gauge the health of the manufacturing industry.

As we can see, the manufacturing index is still above 0, which indicates factory sector growth. Historically it has been a rather volatile index and it is currently in its middle historical range. Nothing to be too worried about as of now.

It is a common practise for banks to tighten loan standards before the crisis. Think raising requirements necessary to meet in order for the borrower to get a loan. Before the Great Recession, many banks relaxed the standards for getting loans. Remember NINJA loans? No Income, No Job or Assets required to get a mortgage? Well, the percentage of banks raising standards for commercial and industrial loans usually rises at least to 20% before recessions. Banks start tightening those standards expecting delinquencies and defaults. However, the percentage of banks raising the standards for such loans is near 0% currently. This is not indicative of a recession at all.

The household debt to service to disposable income shows how much debt repayments weigh on US households. It basically shows how much debt repayments are as a percentage of your income. The household debt service-to-disposable income ratio (right-hand side of the chart) is at all-time lows, and although the delinquency rate on consumer loans (left-hand side of the chart) has risen from 2.0% in 2015 to 2.32% today, it is still lower than at any other time since records began in 1986. This, again, is not indicative of a recession coming soon.

The NAHB/Wells Fargo Housing Market Index (HMI) is based on a monthly survey of NAHB members designed to take the pulse of the single-family housing market. The survey asks respondents to rate market conditions for the sale of new homes at the present time and in the next six months as well as the traffic of prospective buyers of new homes. It shows the liquidity of the housing market and the ease at which homes can be bought and sold. The index has been near all-time highs as of recent, showing little sign of weakness.

Consumer sentiment is an economic indicator that measures how optimistic consumers feel about their finances and the state of the economy. In the U.S., consumer spending makes up a majority of economic output as measured by Gross Domestic Product (GDP). That is why consumer sentiment is key and many traders, economists, and investors alike follow it closely. The University of Michigan Consumer Sentiment Index is one such indicator, which investors monitor very closely. Its base year has been set in 1966, at the value of 100. In 30 of the past 35 months, the Sentiment Index was 95 or higher, a level of optimism second only to when the index was above 100 for 34 out of 36 months from January 1998 to December 2000. While the timing of that (knowing 2000-2001 was the year when the internet bubble burst) is alarming, consumer sentiment is generally quite good.

In the dozen-some charts that I presented in the article, I tried to portray the picture of the US economy. That is, through the labor market, business conditions, bank conditions, the housing market, and consumer sentiment. Contrary to the popular opinion that the yield curve is destiny, I tried to show that the economic conditions in the US are not as severe. Nor are they indicative of a recession coming very soon. The labor market is strong. Industrial production and the manufacturing sector are expanding. Debt service burdens are low, so are delinquency rates, and not many banks are tightening their loan standards. In addition, the housing market is gaining momentum and does not show signs of slowing down. While consumer sentiment remains rather strong.

All of these factors play a role in supporting the economy. Based on this evidence, this data, it is hard to argue that we are on a brink of a recession just yet. However, one should be cautious of the environment we currently are in, and not turn a blind eye to the further future, as things can and will turn south eventually.

If you liked this article and would like to learn more about Stocks and Stock Trading, be sure to check out our FREE course on Basic Stock Trading, and also our FREE course on Advanced Stock Trading. In addition, Tradimo offers a Premium service for those interested in steepening their learning curve and getting access to our Premium content, courses, and exclusive Signals Trading community. Be sure to check that out, like our content and don’t hesitate to leave a comment below!