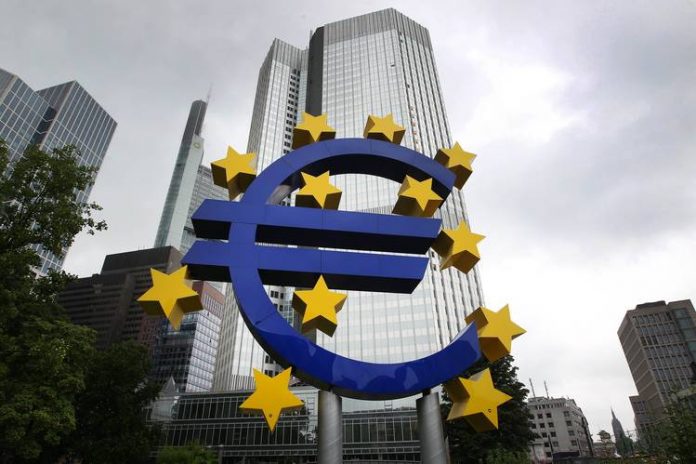 The ECB has restarted its bond purchasing program (QE) and has set to buy €20 billion worth of bonds since November the 1st. As Christine Lagarde takes over the ECB, investors are left pondering about the feasibility and the duration of the program.

Quantitative Easing has been a major part of the monetary policy response to the economic slowdown both in Europe and in the US. Central banks have printed money to buy up government bonds and artificially pushed bond yields down. Due to the structure and legislative nature of the ECB, there are limits to how much the central bank can buy. And it is these limits that are slowly starting to be tested. That weighs on investors’ worries and expectations of just how much more QE they can expect from the ECB.

Investors were initially satisfied with the ECB’s recent promise to resume and continue buying government bonds until inflation moves back to the central bank’s target. It was an open ended promise that President Draghi has made, that reassured investors. However, how realistic is this promise, given some of the practicalities and financial realities in place right now? Let’s take a look.

First of all, let’s take a look at the ECB’s current balance sheet: 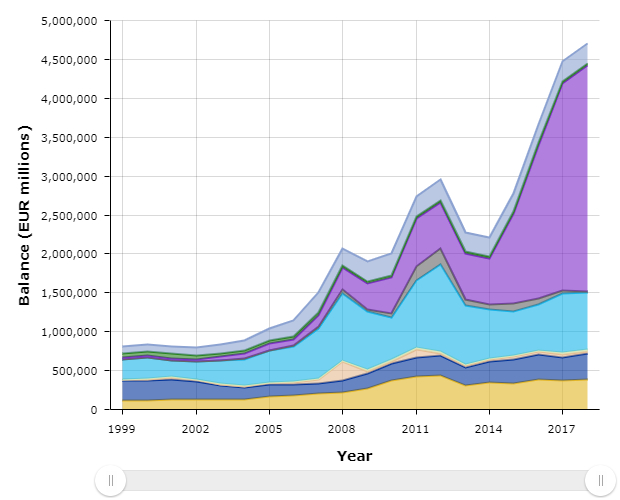 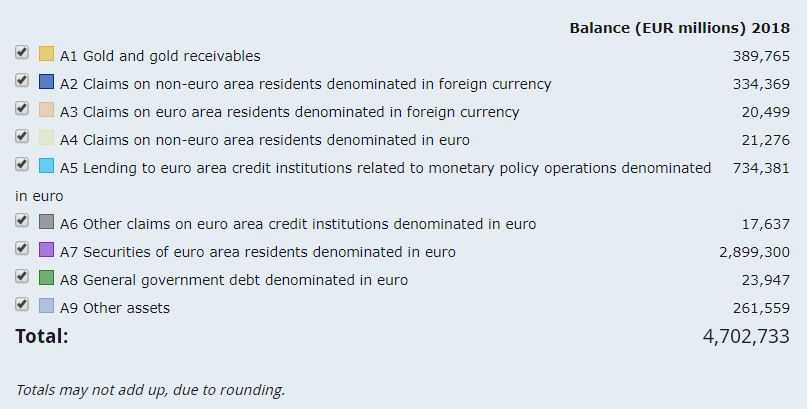 As we can see, the total assets of the ECB have amounted to €4.7 trillion, or €4,700 billion at the end of 2018. However, most of the increase through time can be attributed to the bond buying program or QE by the ECB. Let’s take a closer look at that: 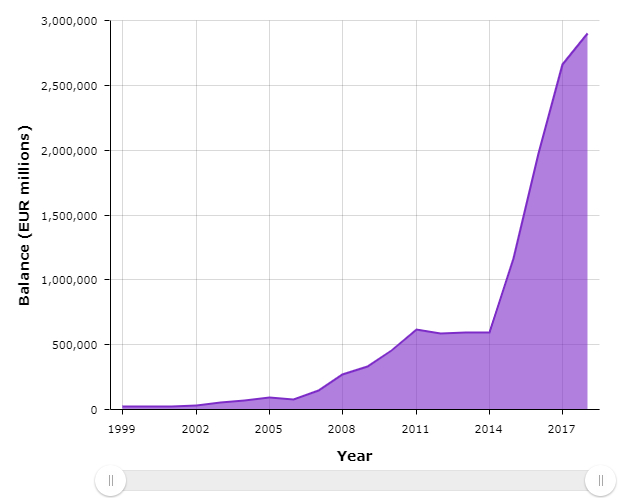 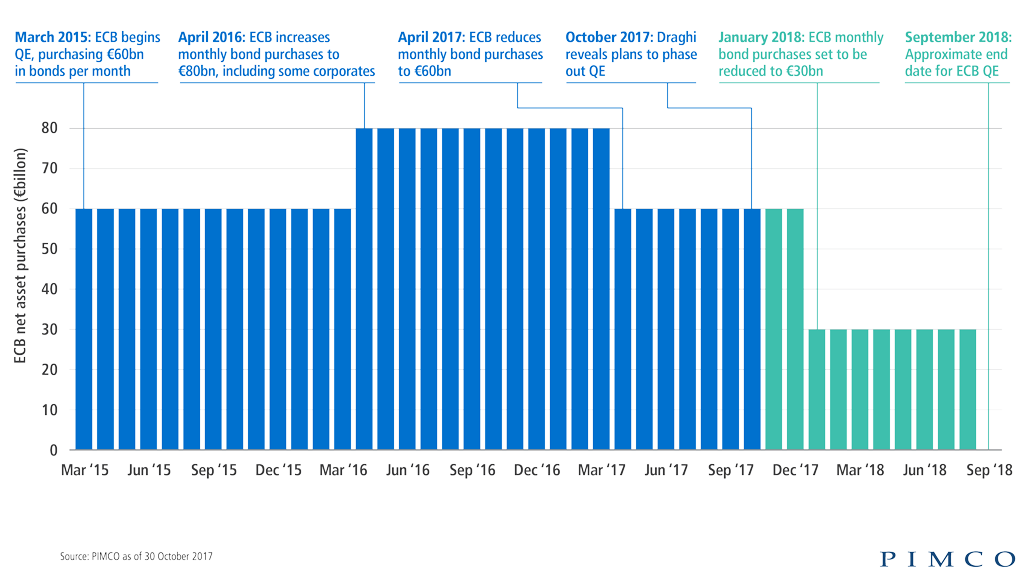 As we can see, throughout the 42 months of QE in place, the average monthly buying amount was about €60 billion. The €5 billion monthly difference from the €55 billion we outlined above is mostly due to the other assets ECB has bought not included in our calculations above and should be disregarded for the most part. What is important here is that the current ECB’s QE program is much less in size than the historical average.

As per the words of the ECB itself:

“The issuer limit refers to the maximum share of an issuer’s outstanding securities that the ECB is prepared to buy. The issuer limit of 33% is a means to safeguard market functioning and price formation as well as to mitigate the risk of the ECB becoming a dominant creditor of euro area governments. To this end, the 33% limit is applied to the universe of eligible assets in the 1 to 30-year range of residual maturity”.

This does beg the following question: how many ECB countries are close to this 33% level? Let’s take a look at some interesting data compiled by Pictet Wealth Management: 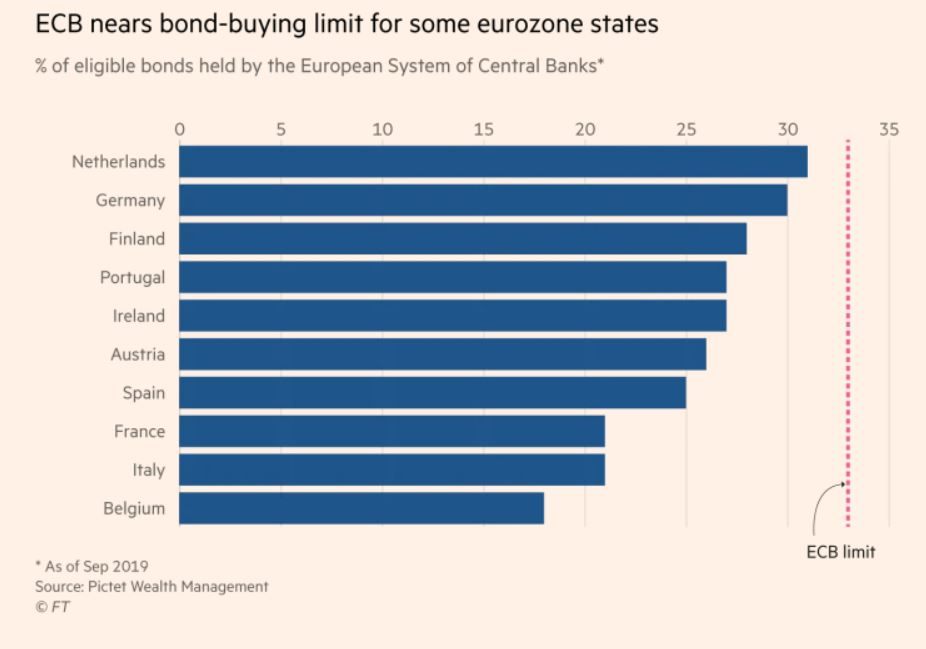 The graph above shows the percentage of bonds outstanding held by the ECB, compared to the 33% limit. As we can see, quite a number of countries are closing in on the mark, or are beginning to. Namely, the Netherlands and Germany. The ECB owns about 30% of outstanding German bonds, with maturity between 1-30 years. The levels are uneven because of another ECB rule: it has to buy amounts in proportion to each country’s contribution to the ECB’s capital. That means it holds a bigger slice of the pie in less-indebted economies.

This raises a big issue. How much room does the ECB have for running large amounts of QE, especially in the cases of such as Germany? This question can be answered by looking at another metric, which is, the euro value of eligible bonds for buying by the ECB. Let’s take a look. 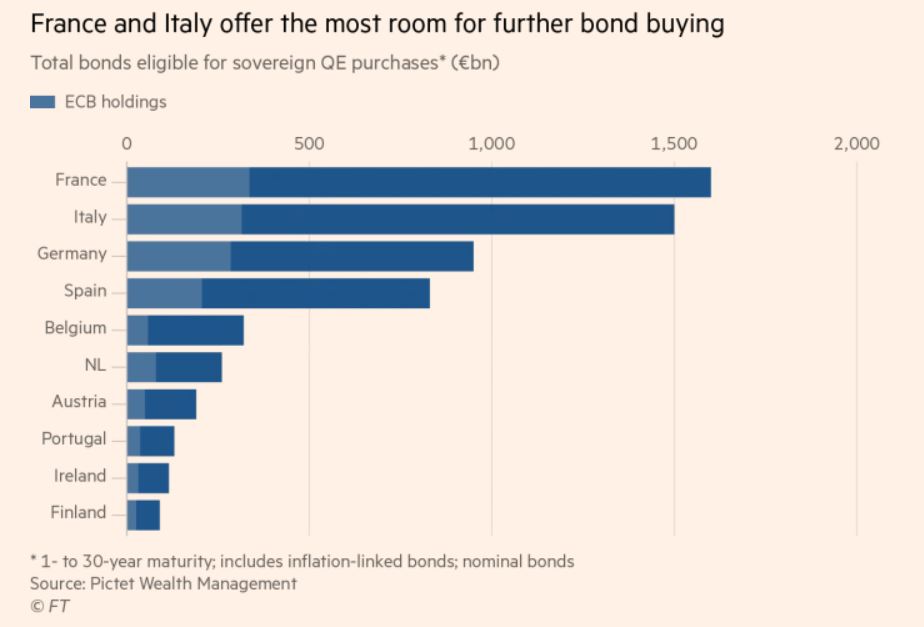 As per the graph above, we can see that France and Italy have the largest bond buying capacity of all the Eurozone countries. Note that the graph also incorporates ECB’s current holdings. In other words, not all the bonds eligible for buying can actually be bought because of the 33% rule outlined above.

However, the ECB can raise the 33% limit. The ECB has already raised another similar limit in 2015. As per the words of the ECB itself:

“At the start of the PSPP, the issue share limit was set at 25%, to be reviewed after six months (Article5(1) of the decision of 4 March 2015 states that “the limit will initially be set at 25% for the first six months of purchases and subsequently reviewed by the Governing Council”).

On 3 September 2015, the Governing Council decided to increase it to 33% subject to a case-by-case verification that this would not create a situation whereby the Eurosystem would have a blocking minority for the purposes of collective action clauses, in which case the issue share limit would remain at 25%.”

PSPP is the Public Sector Purchase Program (or QE for government bonds).

Based on that, the ECB still has questionable room for the bond buying program to continue, let alone at a greater pace. Would this be enough to last and stimulate the economy and the markets? That is hard to say. However, based on what we have looked at it should strike concern for you as an investor, how feasible ECB’s promises to keep QE running for “as long as it takes” are.

Traders must bear this in mind when trading bonds of governments that are close to the 33% limit. That is both in percentage terms as well as in euro amount terms. Germany, for example, has very little capacity left. Investors might get wary that in the future German yields might make a comeback. This could push German bond yields up and bond prices down.

An interesting trade opportunity could arise to sell those bonds that are closer to the 33% mark both in percentage terms and in euro terms while buying those bonds that are further from this limit. However, it is a rather risky trade and needs further analysis and data crunching before proceeding.

In addition to bond traders, Forex traders should also be wary of the situation. This basically means you cannot expect the ECB to pursue increased QE for a prolonged amount of time. That affects greatly the potential to diminish the value of the Euro by the ECB, however at the same time to also the ability to reassure investors and have the firepower to stimulate the economy.