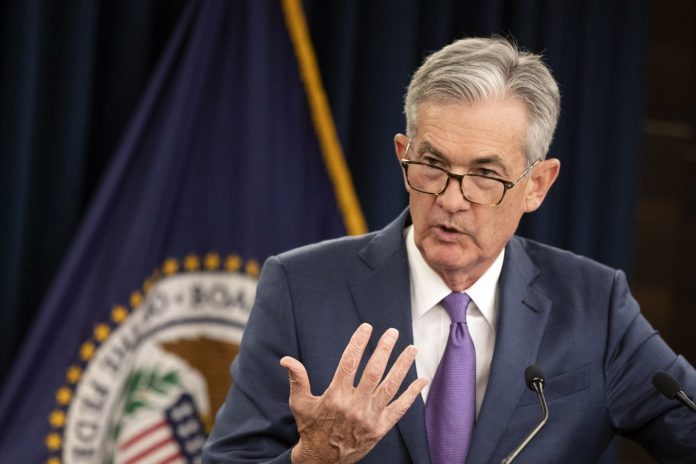 On July the 31st, as widely awaited by most traders, investors, and markets enthusiasts, the Fed has announced its interest rate decision. As expected by most (however, not all), it cut the federal funds rate by 25 basis points, to 2.00-2.25%. Stock markets, EURUSD and bond prices fell on the news, as the market adjusted its expectations. However, the most important takeaway is Fed chair Powel’s statement that this move by the Fed was as he called it, a “Mid-cycle adjustment”. In his speech, he basically indicated to the markets that the Fed is NOT embarking on a series of rate cuts. And this posed a problem for the markets since it was exactly what was expected. As a result, markets fell, even more, adjusting for his hawkish statement.

This widely awaited decision by the Fed has a few implications. First, a key takeaway is that the Fed expects this already longest expansion in US history to be only mid-way through. Second, if this is not part of a longer easing cycle, how did markets react to such decisions in the past? And how does this affect investors and traders alike? Let’s try to find out.

To start off, I’d like to bring your attention to the bigger picture. That is the recent trend in federal funds rates. Interestingly, since the 1980’s they have recorded a downward trend:

What I mean by that is, each tightening cycle peaked at a lower point in every subsequent period from the 1980’s. This matters because it basically means less ammunition for the Fed to fight future crises. As GDP growth slows or enters a recession, how do you stimulate the economy if rates are already low? This trend, if continues, can lead to a worrisome example of Japan, where its GDP and inflation are at extremely low levels. And the government can’t do much since interest rates have already been zero for decades.

Getting back to the actual announcement, there was an interesting observation made by Bloomberg. That is, the so-called “mid-cycle adjustment” tends to really resemble the situation of 1995-1999. In that situation, the Fed made a few cuts just after it ended the tightening cycle: 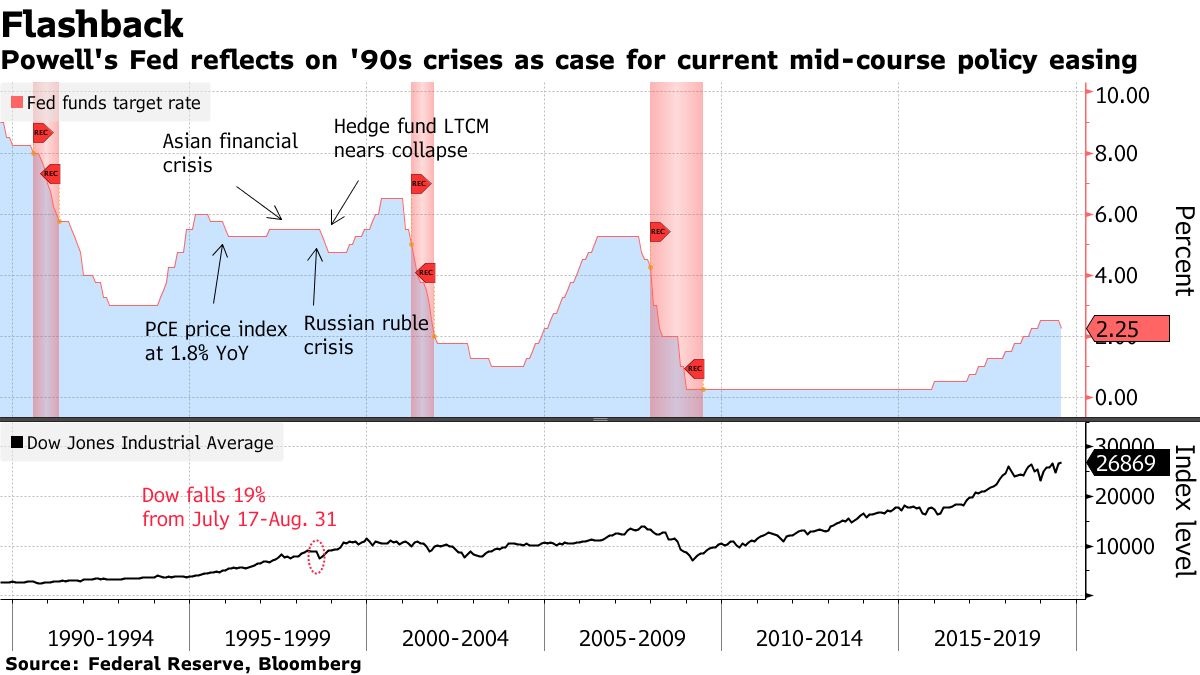 While there were other factors at play, we will not analyze them in this article. What matters is that following the cuts, the Dow Jones Index rose to new heights (Side note: in the chart, Dow falls by 19% from July 17th to August 31st, 1998, and the Fed reacted by cutting rates in September 1998. What is interesting is that back then, the markets expected a sharper move, and the stock market initially fell as a result, only to rebound to much higher levels later). So, basically, if this is what chair Powell has in mind talking about the mid-cycle adjustment, a few questions pop up.

First, does that imply that markets will also rally, as it happened in 1995-1999? Second, did the Fed have this in mind when making the decision? It’s probably hard to tell, but this probably confirms the fact that this interest rate cut will not be a part of a series of cuts aimed at a more accommodative policy in the longer run. That said, however, he did not rule out the possibility of additional future rate cuts.

Let’s take an interesting look at what such a rate cut could mean for stock investors. Since it is the first rate cut after a series of tightening moves by the Fed, let’s take a look at how the S&P 500 reacted to similar decisions in the past, 3 months, 6 months and 12 months from the decision date: 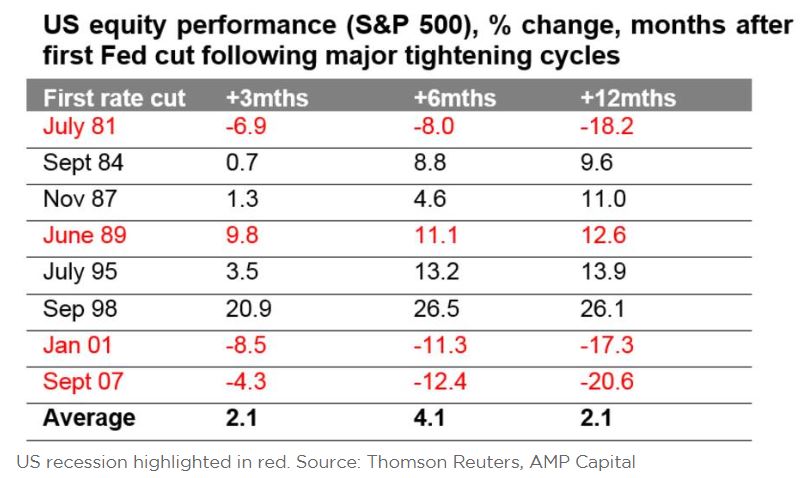 So, what can we take from this? This basically makes us come back to what chair Powell called this rate cut. Which is a “mid-cycle adjustment”. So, it comes down to this: are we really in a mid-cycle, being already in the longest expansion ever recorded, or are we in a late-cycle phase? You probably better wish it is the first one, because if not, then, as our initial analysis on the historical fed funds rates showed us, the US in a world of trouble.

As mentioned in the introduction, EURUSD and S&P 500 both fell sharply on the news. Some of you may be wondering, why did the markets fall if the market was expecting a 25bp cut anyways? I think it has to do with 2 things. First, about a quarter of the market was actually expecting a 50bp rate cut: 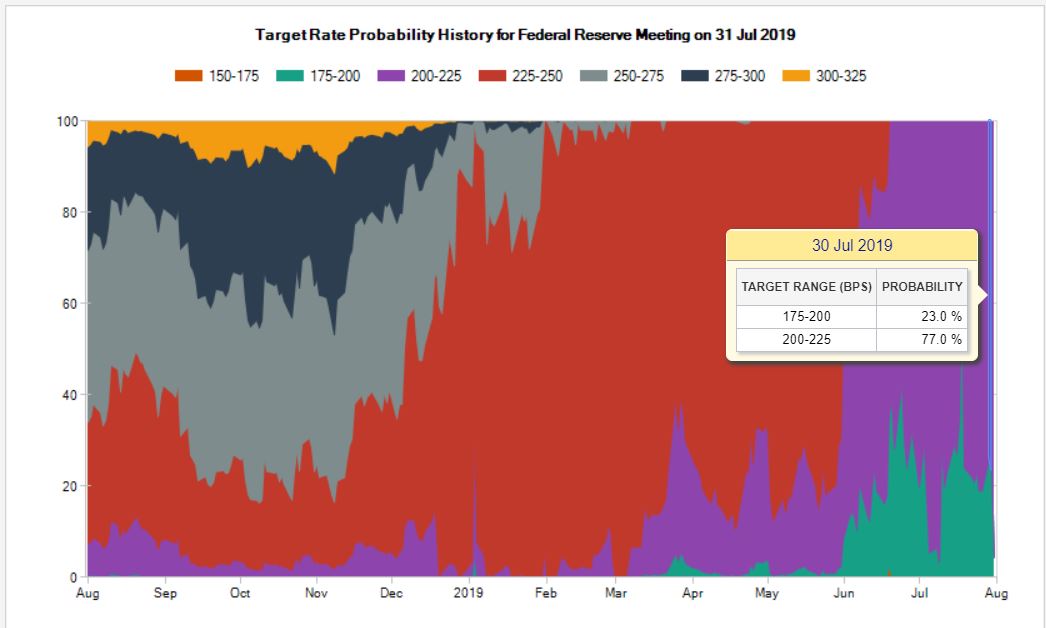 That is something to readjust to after missed expectations of a 50bp rate cut. Secondly, the market had to adjust to the statement that this may not be a part of a longer easing cycle. Or at least that it’s not a given: 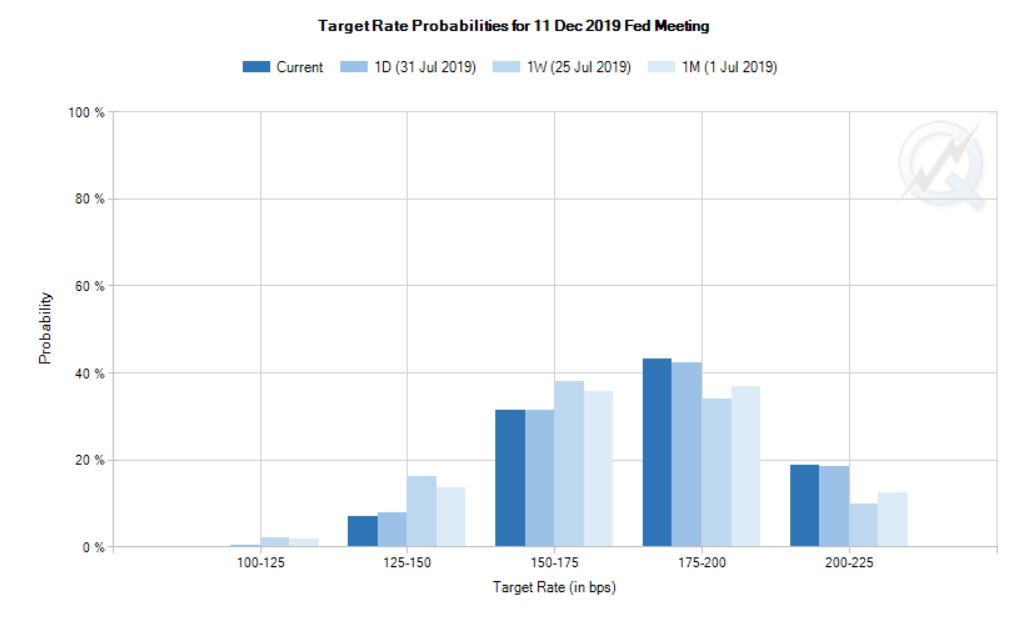 This two-fold reaction can be seen in the EURUSD market: 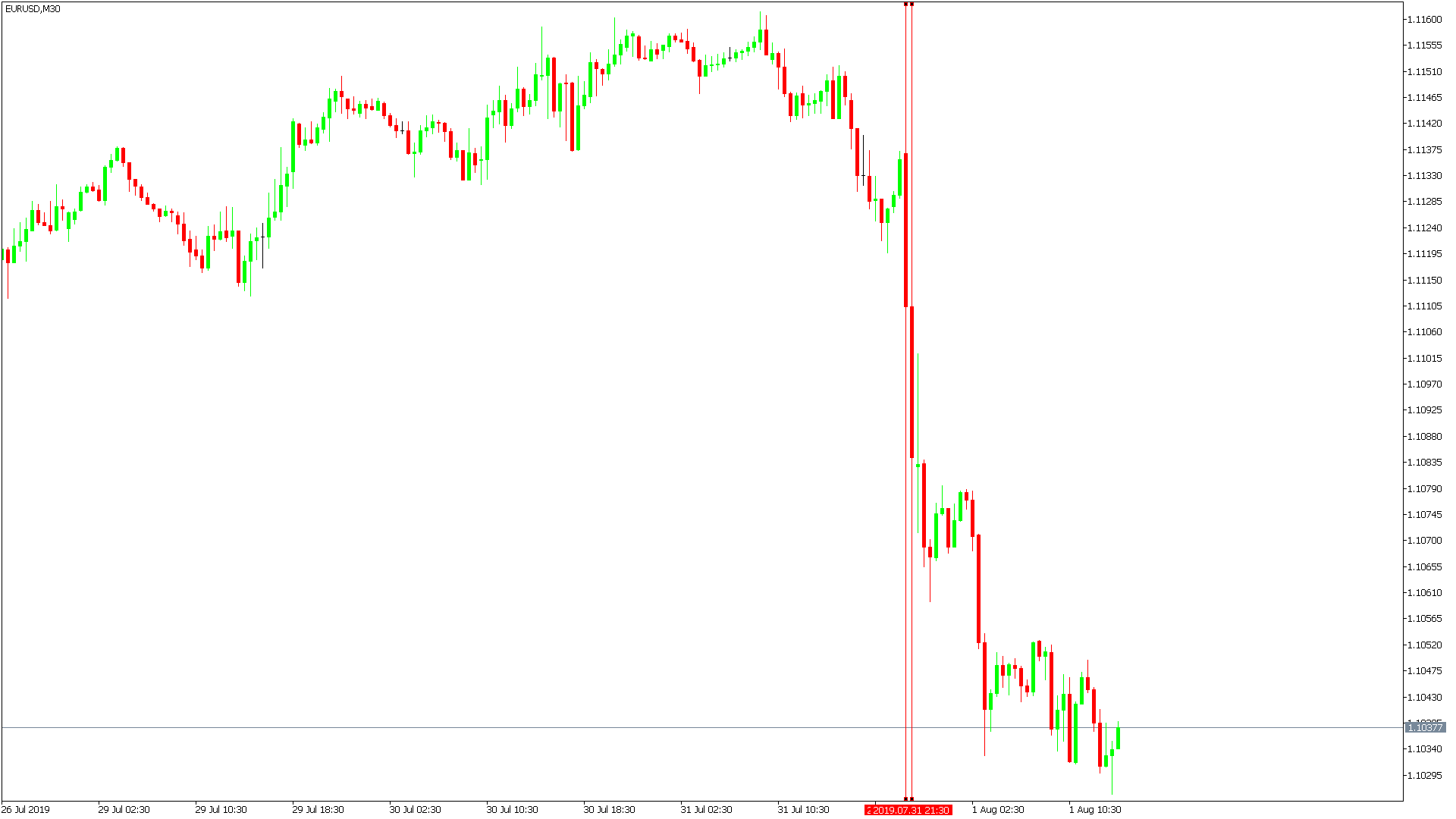 The first vertical line shows the Fed decision time, while the second line shows the start of the Fed news conference. As we can see, in both of those periods the dollar has increased in value against the Euro. 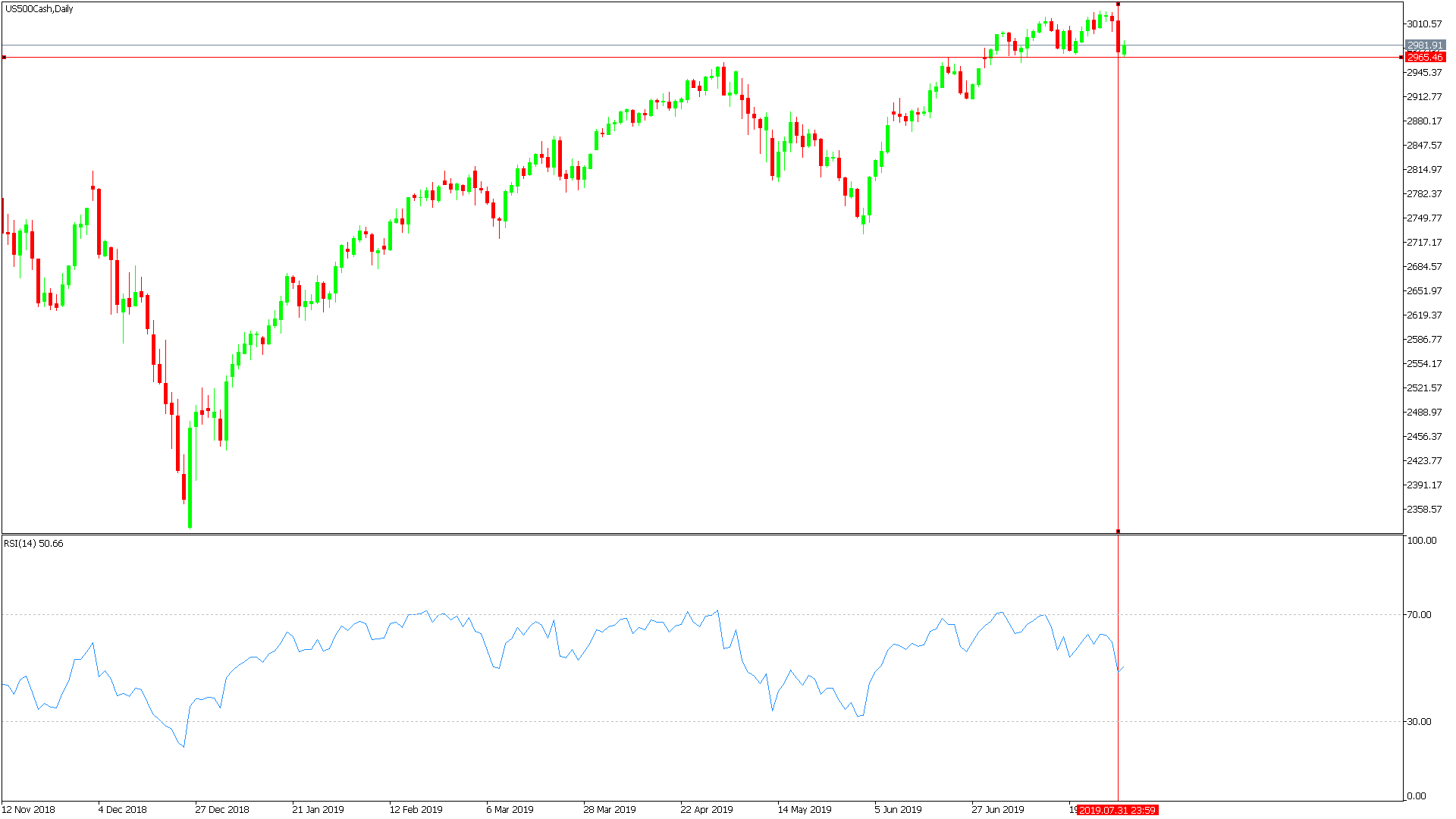 The horizontal line shows, however, that it failed to break out on the 2965 level which still held as strong support for the S&P 500.