As mentioned in the introduction, the attack is significant due to its effect on Saudi’s oil supply capacity. As supply gets hit, prices tend to rise. Additionally, since this is a surprising geopolitical event in the Middle East region, prices tend to jump significantly in a reaction to such events. This also raises the risk premium on oil in general and the risk of future conflicts.

There are 2 main prices you need to be aware if you’re an investor. The Brent price, and the WTI price. Brent is a benchmark for global oil prices, while WTI is a benchmark for the US oil prices. Brent prices rose more than WTI and recorded an almost 20% spike in prices on September 16th, just after the markets opened for trading after the weekend on Monday morning. This was the second-highest percentage intraday spike in prices recorded in history. 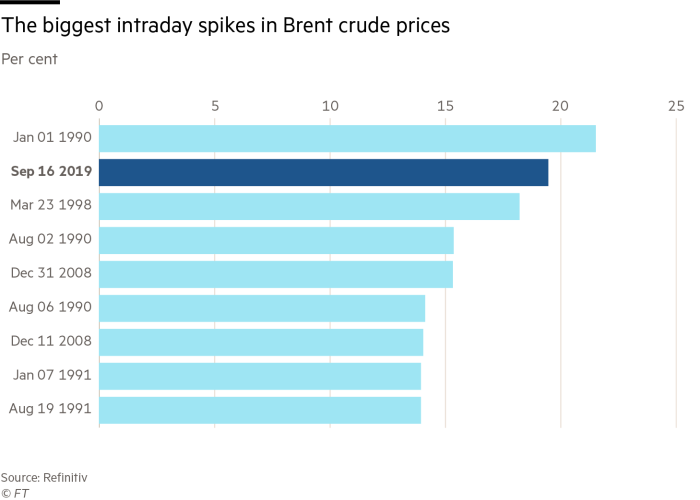 In general, you’d have to go back more than a decade to find an intraday spike of at least 15%. What is more, it is also the largest ever spike in dollar amount in Brent history.

WTI prices also rose, however, not as much as Brent. As mentioned, Brent is a benchmark of global oil prices, while WTI – an equivalent for the US, which has a much safer oil supply chain. As a result, the Brent-WTI spread has widened significantly. 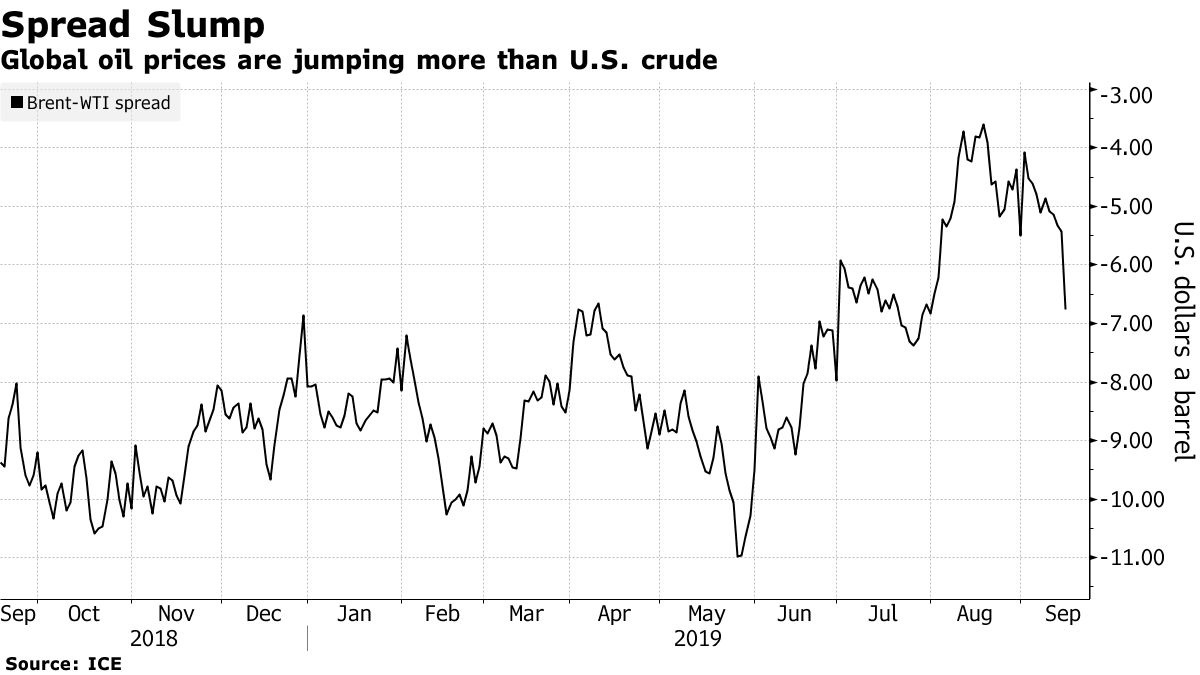 Looking at the forward curve, we can see that prices have been impacted much more in the first few months, and not as much in the later months. This is because the market expects the supply disruptions to be dealt with within several weeks, or a few months, max. 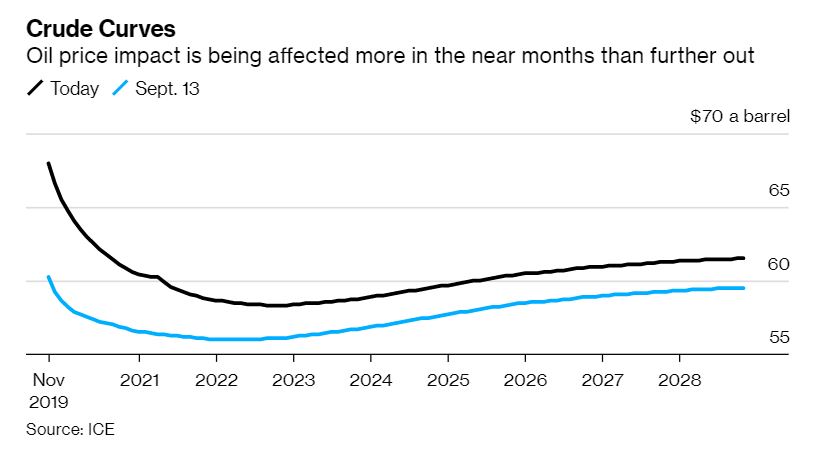 In addition, we can see the risk premium going up in the options market. As a result of the attack on Saudi’s oil facilities, WTI futures options calls are now pricier than puts for the first time since 2018. (remember, calls give you an option to buy a security, while puts – to sell a security at the strike price). Also, the October at the money WTI call ($55 strike), prior to the attacks was priced just above $2. Now the nearest at the money October call is priced at just above $3. This represents a 50% increase in risk premium basically.

Looking at the attack and its disruptive effect, this is the single largest oil supply disruption event in history. And again, as with prices, you’d have to go back than a decade to find another significant disruption. The only disruption of a comparable significance was 40 years ago. This points to how surprising and significant this event was. 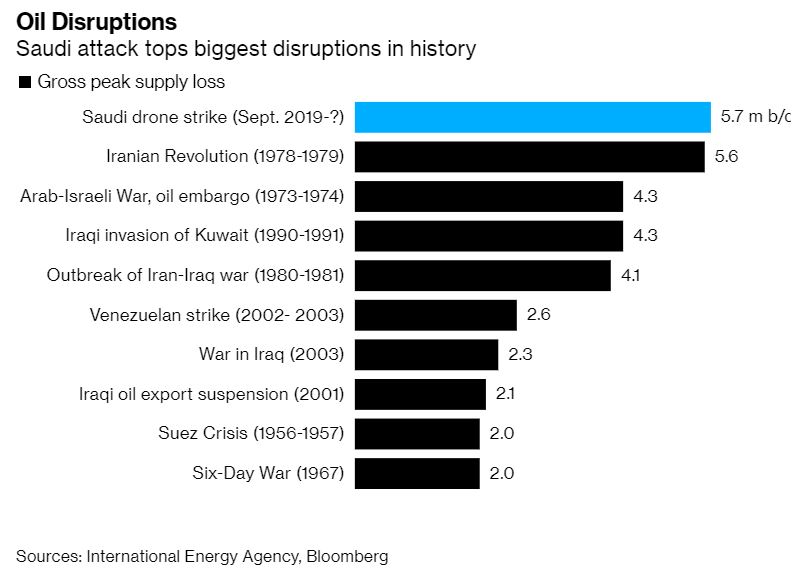 The political response from the US was mixed, with President Trump taking a more cautious approach than some politicians who came out to blame Iran for the attacks immediately. From Trump’s perspective, he did make promises previously to get troops out of the Middle East and curtail oil prices for the average consumer. So, as the 2020 Presidential elections come closer, going into another war and going against his own preachings could prove to be disastrous for his campaign and popularity.

In addition, just before crude oil markets opened after the weekend, President Trump tweeted that the US was ready to help with the supply of oil, drawing from its SPR (Strategic Petroleum Reserve). The SPR has around 650 million barrels in store as of this day, which could theoretically help counteract the lost Saudi oil supply for around 3-4 months. However, it is very unlikely that the US will draw from its SPR as significantly.

The Kingdom itself has around 26 days of crude exports in storage. 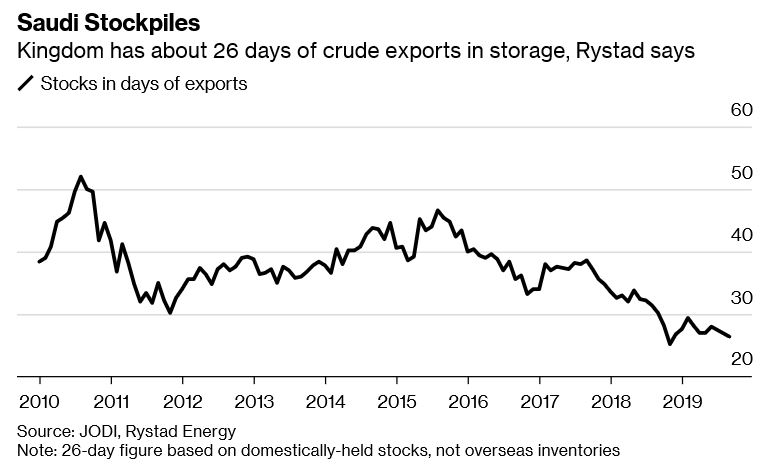 Help from other countries will be limited simply due to the lack of spare capacity available. Both OPEC and Non-OPEC countries simply don’t have as much spare capacity to make for the lost Saudi supply capacity. 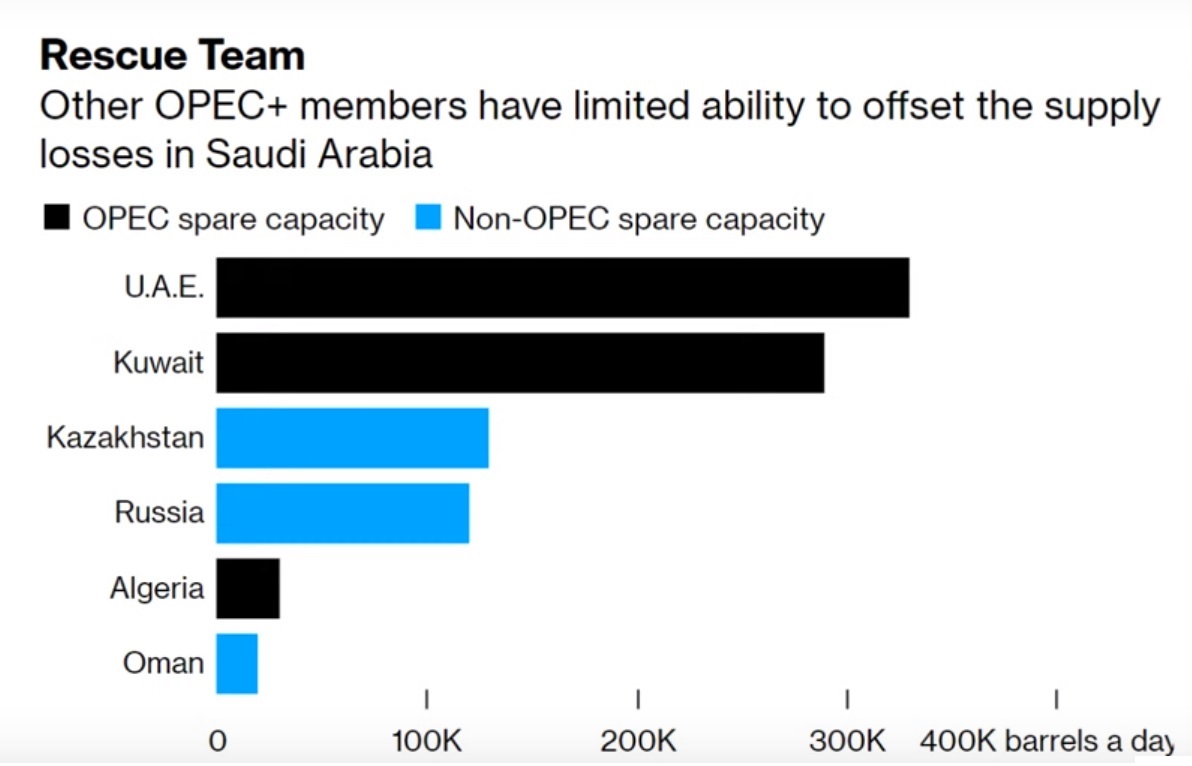 With an event of this magnitude investors and trades obviously have become much more cautious. The risk premium has increased significantly, as volatility rose. The biggest question is how fast Saudi Arabia can restore its facility to recover lost supply to the markets. It is currently a very speculated question, and more answers will probably be provided when the Saudis speak on the issue today, 18:00 BST.

From a technical perspective, WTI has made a big gap due to the attacks on Saudi’s oil facility. Also, as profit-taking took effect soon after the spike, WTI price fell sharply to a $59 handle, and hit strong support, as accompanied by both, the recent downward trendline, and some key levels close to $59. It will stay as very strong support in case future level testing occurs.

It will be interesting to see what Saudis have to say about the attack, and how fast they see that they can recover lost output. In general, depending on the seriousness of the issue, a play on the futures forward curve can be made. Also, crude oil premiums are bound to come down if there are no additional attacks in the region. If there are, however, then we will be looking at a completely different picture of the world.

That is if there are additional attacks in the region, possibly a war, then initially this would be extremely bullish for oil. However, at some point, you would need to take into consideration the effect high oil prices would have on the economy as a whole. A high oil price would raise inflation, and quite possibly, this could lead to stagflation. That is a period of high inflation and slow economic growth. A similar situation happened in the 1970s when the oil price quadrupled in price. Then, what do central banks do? Do you ease and amplify inflation, or do you raise rates, and possibly go into a recession? It’s a lose-lose situation. It may be a far fetched idea, however, it’s something to keep in mind, just in case.